As I savor my time with Picasso, I find myself digressing a little to think about how he allows for thick lines to carry the expressiveness of some of his earlier work. Ex, Harlequin and His Companion or The Two Saltimbanques.

He refines this later on, as he becomes more abstract, but even in his Blue Period I can see he’s already experimenting with it, as he waffles between realism and abstraction.

It reminded me of how Gauguin liked to use thick lines in his own paintings. He is associated with Post-Impressionism, which, according to Nigel Ritchie’s Art, moves away from the realism of how things appear and toward symbolism as a way to express the internal.  (360, 372) Interestingly, it had a lasting influence in the graphic and decorative arts. Ex, Toulouse-Lautrec’s posters. (361)

In Picasso: The Early Years, it says that Picasso signed one of his drawings, Paul Picasso, to express his admiration for Gauguin. (39) It’s easy to see how the use of line in Post-Impressionism had an influence on Picasso’s work.

I was moved by a small drawing of Casegemas (a close friend of Picasso’s who had committed suicide) that went along with his obituary. It’s a simple drawing and yet it carries such pathos. It’s not just the expression on his face but also the heaviness of the medium used and the heaviness of its execution. (33)

Below is my own attempt at drawing Casegemas. 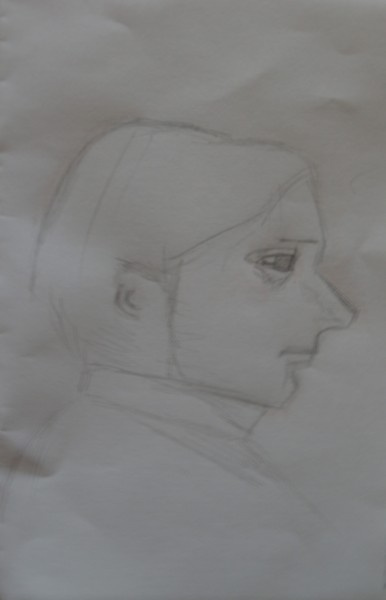 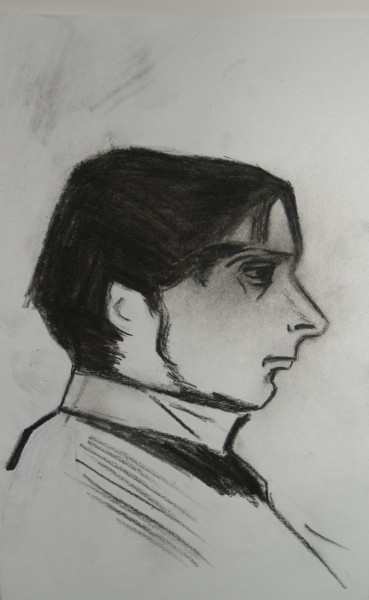 Adding more shadow to the eyes and shading in more of his shoulder would add to the heaviness of my own drawing. Nonetheless, it was good practice in drawing something by eye. I think I’ve spoiled myself with relying on carbon copies and have let my sense for proportions waver.

Moving forward into modern times, I found myself flipping through all the books I have by Seth, a cartoonist who also uses thick lines to great effect. When I read his graphic novella, It’s a Good Life, If You Don’t Weaken, for the first time, I would simply have described it as “atmospheric” or used the phrase “old-time ambience,” while the second time around, I can see that this “ambience” comes from something specific at play within the drawing.¹ 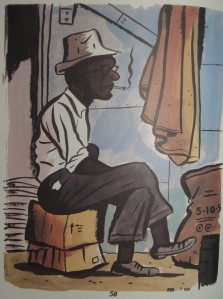 Below is from his Vernacular Drawings, and drawn in the same style as in his novella. The nostalgia is from a sense of pride emanating from the figure and the ease with which he smokes his cigarette despite his not-so-glamorous circumstances. (58)

In many of his drawings, Seth seems to be looking for dignity in old places or the kind of strength you might see in people who are comfortable in one’s own shoes, regardless of what one’s circumstances may be. 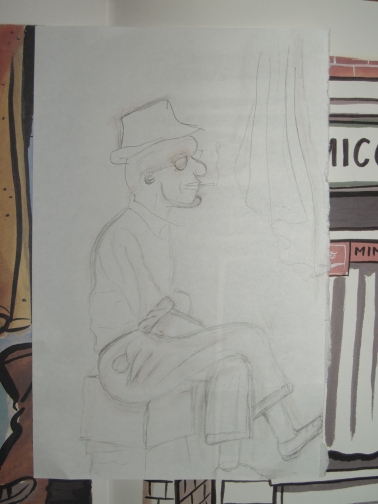 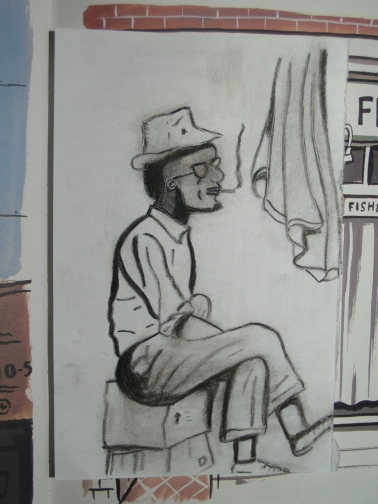 Let me compare this for a moment to the pieces I considered in my post, First Impressions of Picasso. Both artists create tension between subject and context, but while there’s a bit of irony in both, that of Seth’s work isn’t as explicit; it’s softer and instead of being altogether sad, the work holds its figures up as honorable and proud. 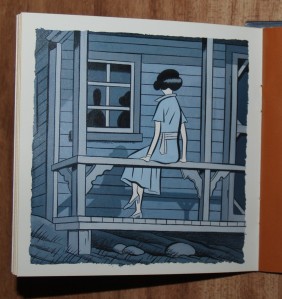 Here’s a drawing from his work for Aimee Mann’s album, Lost in Space. There is dignity in her posture and simple but elegant dress, which is in contrast to her quiet acts of rebellion (sitting on the railing and looking in rather than joining those inside). Is there also a quiet earnestness? It’s difficult to tell, as we cannot see the expression on her face.

There’s a lot going on in this deceptively simple drawing. 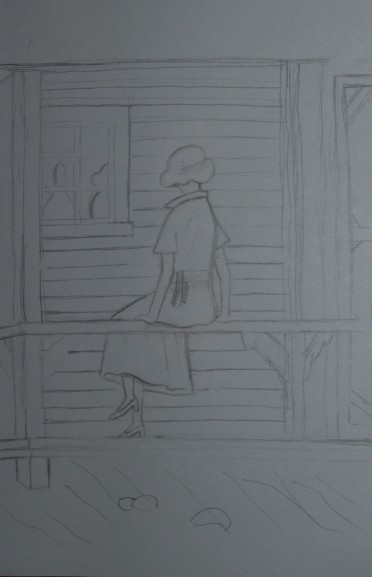 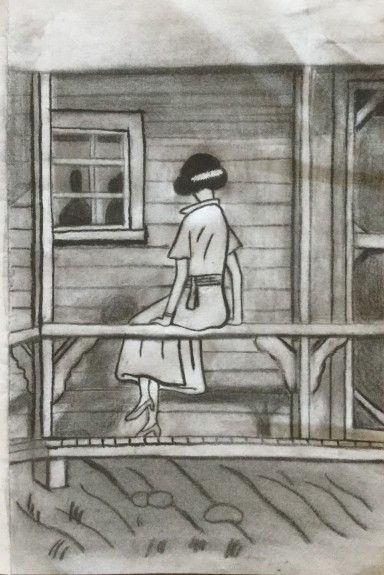 It took me three sittings (3-4 hours each). In day one I drew the central figure, with a disproportionate amount of time spent on the feet. My sense of proportion and perspective are kind of wonky, and I had to be careful to make them just as delicate as in the original. I also added a charcoal outline to the figure and tried to rush through what surrounds the figure, so that day two was redoing all those lines and realizing I got the window wrong but had no choice to keep it as it was because I didn’t think there was any way of undoing the charcoal.

I was wrong. You can erase charcoal. Also, while you can’t completely erase it if it has been pressed into the surface, you can hide it, as it is a lot lighter than charcoal which you do not try to erase. It’s almost as malleable as pencil, even though the pigment is much more rich and intense.

In day three, I finished applying a charcoal outline to the rest of the picture, with the window as it was, and then spent a bit of time smudging or erasing and reapplying charcoal. Areas which serve only as a background were left blurred, while the central figure and the areas of the house which are supposed to be bathed in moonlight were given fresh hard lines, so that the “lighted” areas could be in greater contrast with its surroundings).

If it was up to me, I would not have made any hard lines, but doing so, in following with the original, I realized that the difference between hard lines and blurred areas gave the drawing another dimension. It was fun deciding how this aspect of the picture would play out. It made me think of the choices you must make when using charcoal, as well as the choices made by Expressionist artists.

1 I wanted to draw something from his novella, but all of its drawings rely heavily on its color scheme (subtle variations of blue, black, grey and white) to carry the mood, and I didn’t have the right kinds of blue. I was tempted to color in my drawing of the one from Lost in Space, but realized that without the right kinds of blue, it would look sloppy, and distract from the overall effect.

It’s too bad, because It’s a Good Life, If You Don’t Weaken is quite beautiful.