I have a few things that are products of automatic drawing, which I’ve put aside for a while. I always wanted to do something with them but, until now, I couldn’t think of anything.

They are works in progress. (Sorry, more incomplete work.) But they share something in common: each were completed in one sitting but can be used as an “element” in a larger work.

For the first two, I was limited by the actual surface area.

When I ran out of room, I simply stopped. This was last year and at the time I wasn’t at home, where I could reach for a larger piece of paper, and once I was home, I had stepped out of the right frame of mind and didn’t bother trying to find it again.

Well, in 2009, I had bought a book that takes you through techniques in contemporary drawing (Drawing, 5th edition (2003), by Teel Sale, et al), and recently, an image I’d seen while flipping through its pages, had lead me to a place, mentally, where I could expand on the above ideas. 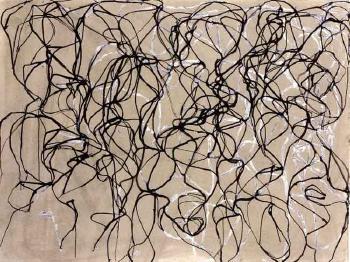 You know how they say, “There’s no role too small for an actor?” It reminds me that, no matter how basic one’s approach is, you can still create something as moving and intriguing as this.

Material used were ink, ink wash and gouache on paper, which also gives me ideas, although, for now, I’m sticking to ballpoint pen, at least until I’m sure of what I’m doing.

I’m tentatively calling this Solar Flare. I made a carbon copy of the top drawing (above) and considered simply repeating it over and over again… but it quickly started looking like a wallpaper design.

Do you see how in the initial drawing there appears to be a girl’s head? It’s fine if I do it once, but it’s easy to notice if I do it more than once. I thought it would be enough to change all but one of those places where the girl’s head shows up.

But it wasn’t enough. I began noticing how the other part of the initial drawing was making patterns. It was becoming “easy,” which doesn’t incline a viewer to keep one’s eyes roaming through the whole work, and although I’d wanted to call this “Wires” before, and even had planned on drawing half of the lines in green pen, I can’t help but see this other part of the initial drawing as a flower.

On the other hand,… maybe I was being too ambitious. Maybe I should see this approach through (using one drawing over and over again). I could be hanging onto the idea only because I like parts of it, mostly the new parts… and it takes a lot of time… and there was so much hope for the initial idea… Sigh…

But I decided to start over again with the intent to use the flower as a recurring element, but to space them out with new lines and to make sure no two flowers are going in the same direction or doing the same exact thing.

I’m in the process of making a carbon copy of the larger work, and along the way, editing the lines or making different choices than the first attempt, one 9″ x 12″ sheet of tracing paper at a time.

I never do a good trace, so I really am drawing the image over again, which is good practice for drawing “good” lines and maybe even developing a style… ?

So far, this is what I have for my second attempt.