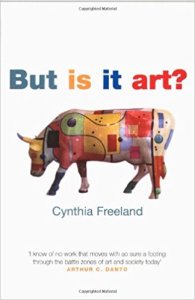 The following is a long and meandering book response to But is it art? (2002) by Cynthia Freeland. 256 pages. I’ve read this book once.

The title is a rhetorical question. It is a challenge, and Freeland answers the challenge by illustrating how the very definition of “art” varies between eras and cultures, and thus, shows us why and how our modern day art world embraces a pluralistic approach to appreciating art.

This is in the first two chapters, which gave me pause. My primary goal is to have a healthy relationship with art, and upon a healthy does of self-reflection, I have to admit that maybe I was looking for Beauty and not “good art,” per se. It is not a reflection of some change in taste, but a shift in perspective. I like what I like, while the meaning of “good art” takes a little more consideration.

In the first two chapters, there is an unstated problem, and that is how art philosophy is not traced back to pure logic but to actual art. She quotes the philosopher, Arthur Danto, as saying, “In a way, the philosophy of art has really only been art criticism,” (57) while she is observing how Danto has been weary of giving art too narrow of a definition, but she leaves the question, “Is art philosophy only art criticism?” unanswered.

This leads me back to one of the concerns I mentioned in my last post, and that is how the study of art seems to be in the purview of anthropologists as well as philosophers. Where does the philosophy begin? [When it comes to philosophy, I like to remind myself that all logic must begin somewhere. These beginnings may not be as clear as science, which begins with observations of a subject in a controlled environment, but the beginnings to any philosophy is accessible to us, or it should be. I see anthropology as somewhere in between.]

The book is asking us to not consider a given work in a vacuum but in a larger cultural/historical context. The appreciation of a piece begins with the title of this book, along with, How is it art? Why am I standing here looking at this thing? What is the value of this experience? Sometimes it is easy to answer these questions, but often it is not; and when it is not, you might call it “difficult art.”

As I journey with Freeland through the history of art, I find myself open to approaching my earlier questions differently. As I said, I am asked to make a shift in perspective.

Freeland begins with Kant and Hume, who she calls the fathers of aesthetics, who emphasized the formal aspects of a given work, along with the idea that one should keep a certain distance from any given art, or a level of “disinterestedness,” in order to appreciate its beauty. This holds until we get to Warhol’s Brillo Boxes, which the author calls “philosophical art.”

As I said earlier, the idea of art seems to be based on what we have called art. It is not arbitrary but it is also not some idea that resides somewhere in the clouds, like Plato’s perfect ideas or even Kant’s Critique of Judgment. It is based on actual work.

Warhol made exact replicas of the Brillo boxes he might’ve seen in a supermarket. Immediately, we must ask, What qualifies his Brillo Boxes as art? Does their being in a gallery make them art? The philosopher, George Dickie, said yes. Freeland’s quote uses more words, but basically that’s about it. It seems arbitrary.

Well, Arthur Danto, another philosopher, says it’s more than that. When an artist exhibits something as art, he/she does so in a given theoretical context. It is art because it prompts an audience to consider ideas it is ready to consider and not just because it’s in a gallery. It is philosophical.

My own response: Brillo Boxes is a great demonstration of Warhol’s sense of humor. It is fighting for its own interests in the form of Brillo boxes. It may seem light-hearted and self-serving; but it also works in the service of a much larger campaign and that is for freedom of expression. A work which is well-received and displayed in a public setting is made accessible and has a chance of being found and considered as art.

When Brillo Boxes was displayed at the Stabler gallery, art philosophers such as George Dickie and Arthur Danto were asked to think about the idea of art in a new way.

I catch myself wondering about Kant’s idea of disinterestedness or keeping one’s distance. Kant was weary of allowing one’s political or religious or otherwise personal biases to taint one’s aesthetic response to a given work of art, because it would interfere with one’s “free play of the imagination.” How do you know if it’s beautiful or if you just think what it expresses is beautiful?

These are fair questions. However, modern art often not only rests in the meaning of a work, the work is commenting or trying to persuade/influence its audience in some way. When we are asked to engage with the meaning of a work, how are we to keep our distance? Brillo Boxes is the artistic equivalent of a wry smile. However, what about art that is intended to shock and/or horrify? When you don’t respond in such a way, the work has not successfully expressed its full meaning.

Here is another shift in perspective. If Art is from Life, and apart of life is political, then a part of Art is political.¹

Why the fuss then? It’s because politics + art (often) = propaganda. We can get into the history of propaganda, but it would be a hug digression. However, if you google art as propaganda, you will get a lot of leads into the question of whether or not propaganda can or has been seen as art.

The obvious danger of propaganda: With pressure from large institutions, which have the power to influence in multiple ways, people may stop asking if a work is truthful and only ask if it works in favor of whatever the institution wants. The problem, when it comes to art, is not that art can be a means to another end. The problem is that once you stop asking Art² to do what it can do — speak for itself — you get into territory that can be arbitrary or, worse, false and disharmonious to how one actually feels and/or thinks.

The perceived danger of art is that we may forget to keep our distance and get swept up in a work’s influence without thinking about how it’s having an influence on us, false or no.

The reality is a little more complicated. This perceived danger is addressed by the art community when it draws some sort of consensus on a given work of art. It is why we have discussions about art, because the value of a given work is given only when it has meaning and has been given an interpretation.

Art is a social phenomenon, which requires that we engage with it because the greatest thing that can undermine Art is silence. It is up to us to call it “good art” or “bad art.” It is up to us to argue for or against it or dismiss it altogether.

With the evaluation of art comes an implied hierarchy of art. We not only see it in their being bought and sold for relative amounts, which vary widely, but in museums as well. This draws up the question, What makes “good art?” What accounts for the difference in values?

1 Politics is defined as the management of power. Power can take on many forms: physical, intellectual, authoritative (having authority); even social, as any social dynamic between two living beings can have a political dimension.

Think of a parent-child relationship or one friend going to another friend for advice more than vice versa. Politics is in our everyday lives. All art, therefore has a political dimension.

2 By Art, in this instance, I mean the art of conveying an idea. If it’s a powerful idea, it should be reflected in one’s art. If it is a weak idea, art which revolves on such an idea will be that much more weak.